Originally, this area is composed of 9 countries:

Brittany means a complex geographical and administrative entity that brings together several countries with different traditions and histories. 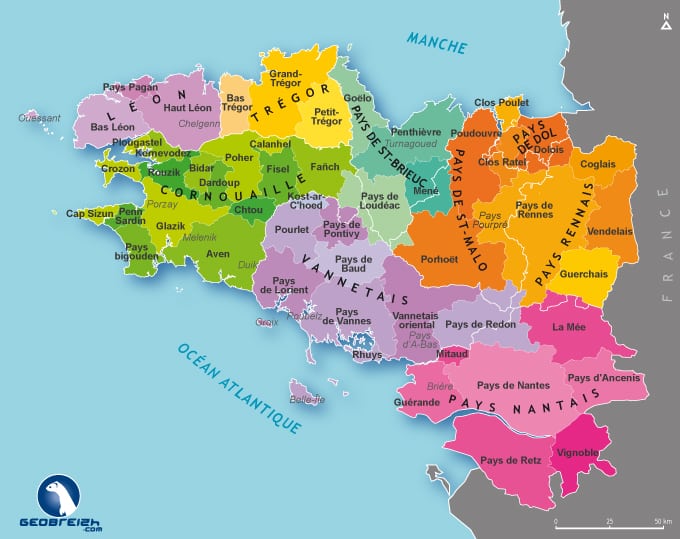 All these historical countries are divided in so-called traditional country whose boundaries fluctuate with the role it has played, being listed in administrative entity or identity and cultural area.
These countries are roughly cut to the ancient bishoprics and reorganized during the creation of the five departments of Brittany in 1790: Côtes du Nord, Ille et Vilaine, Finistère, Morbihan and lower Loire Nantais that divides the country.
Since 1999, every major city relies on a country: 26, including 21 in the Brittany region.

Although land armoricaine was always busy, including the Neanderthals which was found one of the oldest homes in Menez Dregan. Over the centuries the peoples became sedentary and then Brittany has five main peoples: Coriosolites (Côtes d’Armor), the Osismii (Finistère), the Veneti (Morbihan), the Namnètes (Loire Atlantique) and Redones (ille et Vilaine) maintaining relations with the island Breton including trade tin.
From the third century, Roman appeal to many island Breton (the inhabitants of Britain called Britania) to occupy and defend the weakly Romanized Gallic Armorica against the raids of Saxon peoples (Northern Germany) Frisian (Netherlands) and Irish. It is only under the Roman empire that sustained emigration Breton Island grows and continues Ves, with the flight of Breton island because of raids Gaels Celtic (from Ireland and Scotland).
It is over 2 centuries Gallic Brittany welcomes exiles in the British Isles, taking with them their language and customs.
Armorican Gallic language and Breton were similar languages ​​and the massive arrival brought a revival of the Breton language and Celtic traditions. The Brittany becomes a territory with a different cultural identity against the franc, the new masters of Gaul.
Breton create three kingdoms during the High Middle Ages: Bro Waroch (Country vannais corresponding to the current Morbihan) Bro Gernev (Cornwall part southern Finistère) and Domnonée (country Trégor in the country of Dol, coastline that covers the coastline Breton North). These territories oscillated between temporary submission and rebellion facing the Frankish kings.
But the unity of language does not follow those boundaries and two languages ​​differ: Gallo (Romance language) and Breton (Celtic language), this differentiation factor complicates the mapping of the Breton identity.
To discover the history of Britain through plux beautiful tourist attractions, book your  mobile home in Brittany Finistere camping Bay Terenez.
History Brittany, Brittany camping, rental mobile home Brittany